The Himalayan Climate Boot Camp (HCBC) held from April 21-26, 2022 in the Everest region has come to an end with a debriefing session at the UNESCO office in Kathmandu on 27th April. Journalist fellows from three countries in the Koshi river basin – Bangladesh, India and Nepal – and mentors shared their experiences and observations from the boot camp, perhaps the first ever expedition of a group of journalists to the Everest region. HCBC was organized by the Nepal Forum of Science Journalists (NFSJ) and funded by the Spark Grant Initiative of the World Federation of Science Journalists (WFSJ).

A total of 18 participants – 8 journalist fellows, 3 mentors, 4 members of the project team, a representative from UNESCO, an Austrian guest journalist and a student observer – discussed various facets of climate change and its impacts on lives and livelihoods of people in the region.

“Taking journalists to the Everest region and allowing them this first-hand experience of the effects of climate change in itself is a huge achievement of this unique project,” says Subhra Priyadarshini, Chief Editor of Nature India and one of the mentors of HCBC.

According to Chhatra Karki, team leader of the project, this event would also forge a solid network of South Asian science and environment journalists and will lay the foundation for exchange programs among journalists in this region.

Fellow visual journalist Zakir Hussain Chaudhury from Bangladesh says the opportunity to travel through the high mountains of the Himalayan region and capture pictures of mountains, forests and people was unparalleled. “It was eye-opening to see the growing impact of climate change in the region,” he said.

“The bootcamp has been an exciting journey to navigate deeper into the underreported dimensions of climate change and environment,” said Arathi Menon, one of the journalist fellows from India. Anna Sawerthal, a staff journalist at Der Standard, Austria, who was visiting the Everest region, also joined the boot camp to seize the opportunity of getting a first-hand experience on the goings-on in the Himalayas.

HCBC mentor Dr. Sudeep Thakuri, a climate scientist and Dean of Mid-Western University in Surkhet, Nepal, said the boot camp was the first such event he had attended. “Although I have presented several research papers in conferences on the climate change in the high mountains, this is a unique initiative to bridge climate science and science journalism.” 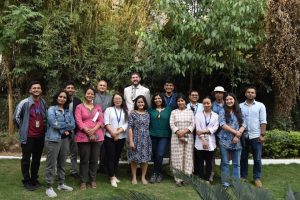 “I am really excited to hear interesting story ideas from journalist fellow ranging from the impact of climate change in agriculture and pastoral traditions to the gendered and political dynamics of climate change,” said Kushal Pokharel, Deputy Team Leader of HCBC.

Michael Croft, UNESCO’s Head of Office and Representative to Nepal said UNESCO looks forward to working with the various journalist associations in the South Asian region on common agendas of science, education and culture.

Under the close supervision of the three mentors, journalist fellows will now work on story ideas that they finalized during the boot camp.

The project team firmly believes that the climate stories from the HCBC will not only add to the body of science journalism in the region but also bring in new perspective to the climate issues experienced by the journalists.