The Botanical Garden in Medellín is a non-profit institution whose scientific efforts are focused on nature. It is recognized for the quality of its collections and management of resources in the conservation of flora. Besides being one of the places that best represents transformation in the city, it has also played an essential role in development by proportioning areas for coexistence and civil and social inclusion. The Botanical Garden in Medellín is recognized globally as a museum and part of the International Council of Museums. As a botanical garden, they run permanent programs of basic and applied research, in situ and ex situ conservation, that is, conservation in the natural environment of the plant or outside it. Its mission is to generate, disseminate and apply scientific knowledge on the floristic diversity of Antioquia and the country in relation to the tropics, contributing to its valuation, conservation, restoration, and management to promote the sustainable and ethical use of flora and contribute to the well-being of Colombians.

The Joaquin Antonio Uribe Botanical Garden of Medellín (Spanish: Joaquin Antonio Uribe Jardín Botánico de Medellín), more simply known as the Botanical Garden of Medellín, is a 14-hectare botanical garden in Medellín, Colombia. The botanical garden has 4,500 flowers and 139 recorded bird species. It has an important collection of orchids preserved in an architectural space called the "Orchideorama". 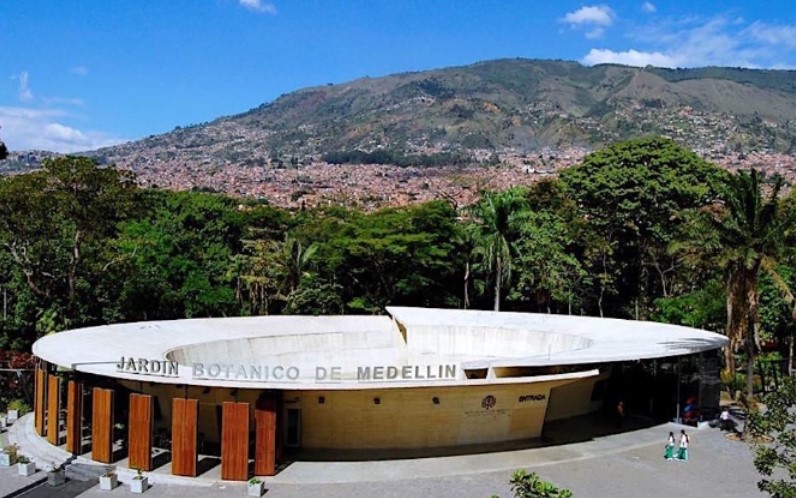 The entrance pavilion to the botanical garden was designed by Lorenzo Castro and Ana Elvira Vélez. The garden includes a butterfly house, cactus garden, exhibition spaces, library, and pond. A plan to create an additional pavilion was rejected and a competition for local architects was devised to come up with a new structure for the park.

The winners of the project designed the Orchideorama. This structure was jointly designed by Plan B Architects and JPRCR Architects. The structure is 65-feet high. It is a wood meshwork canopy with ten hexagonal flower-tree structures that collect rainwater and shelter an orchid collection and butterfly reserves.

In the late nineteenth century, the land now occupied by the botanical garden began was a farm known as The Bathhouse of Eden (la Casa de Baños El Edén). The farm was originally owned by Mr. Victor Arango, and then his sisters and family listed on the deed.

The garden was temporarily closed due to high crime rates in the area. A plan was created to demolish the gardens but these were changed in favor of making renovations to the park.

It acquired the name "Joaquín Antonio Uribe Botanical Garden" in 1972 when the facilities were enlarged to add a much larger collection of plant species, an auditorium, library, museum, and spacious dining areas for visitors.